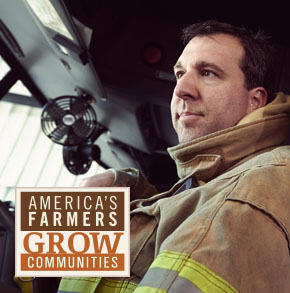 You might not think it, but farming is still the major source for many of the foods our country consumes.  Soybeans, cotton, and corn are just a few of them items grown.  In fact, agriculture is the nation’s largest employer, providing jobs to 23 million Americans, from farming, to processing, to storage, to transportation and everything in between.

The majority of farms are owned and operated by families.  Many families have been farming for several generations, while others are just starting out.  One family, The Matthews, started farming in 1993 when Travis & his brother Hoss took over the family farm after their father was killed in an accident.  They were both in high school at the time.  Today, Travis and his wife Melinda have four children: Grant, Avery, Hudson, and Emelia.  They grow 8,000 acres of corn, soy, and a little wheat on their farm in Missouri.

I have a hard enough time just trying to grow vegetables in my yard, so I can’t even begin to imagine how much hard work goes into managing 8,000 acres.  You can learn more about the Matthews and other farm families by visiting America’s Farmers.

This post was created in partnership with America’s Farmers. All opinions are my own.