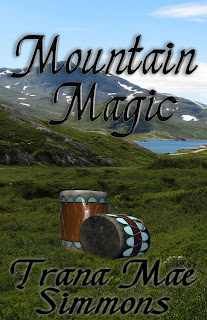 Today only, you can get a free copy of Mountain Magic, a historical romance e-book by Trana Mae Simmons, for free on Amazon: http://tiny.cc/mxhq4

Can a born and bred mountain girl ever find love with an Eastern tenderfoot? Jonathan Clay won the ragamuffin Caitlyn O’Shaunessy in a game of chance with a Nez Perce, and once he got past her smell, he found a feisty woman who aroused desire like he had never known. Cat would rather face down a mama grizzly than confront her feelings for the blue-eyed southerner who rescued her. Set against the backdrop of the wintry Rocky Mountains, their feelings transform into a passion that just might overcome all obstacles.

Jon came to the mountains to escape the betrayal of his fiancée, now his brother’s wife and mistress of the plantation Jon should have inherited. If his senses had been clear instead of muddied by alcohol, he never would have made the bet that landed him Smelly Woman with Wolf’s Teeth below Belly. Yet once she cleans herself up, her beauty hits him in the gut and stays there…until she opens her mouth. Her butchered English hurts his ears, and the guileless way she acts would cause a scandal back in Virginia, should he even think of taking her home with him.

Cat figures out the tenderfoot has blue eyes…once he stops squinting at her in distaste. He’s tall, and big. Too big to fit into the cabin her adopted father Mick left her after he ran afoul of the grizzly. Yet she has no choice if she wants to find her way back to the cabin before winter sets in. She’ll give him one thing: he’s a good shot, which he proves when he kills the rogue buffalo before it can gore her. Over the winter, maybe she will find a few more good aspects in his favor.