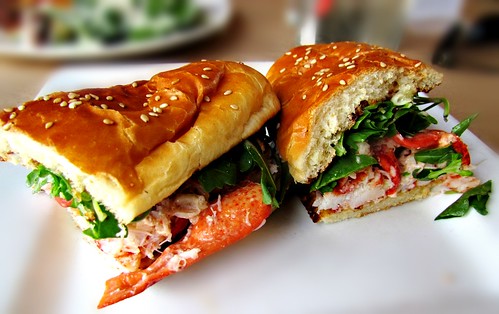 Perched over a marsh at the southern-most point of New Hampshire’s 13 miles of Atlantic coastline is Brown’s Lobster Pound. This family-owned restaurant on Highway 286 has been around for 65 years, and it doesn’t disappoint.

The lobster is fresh out the tank that you see when you place your order (cash only, by the way). You can sit inside at one of the big picnic tables in the cavernous, no-frills space or head outside to the deck. Spoiler alert: Brown’s has a great view of the Seabrook nuclear power plant across the aptly-named Blackwater River tidal basin, but that hasn’t slowed down Brown’s business one bit.

Further north along Route One, you’ll find Scarborough Lobster. This is the real deal, and if you’re lucky, you might just wander in at the same time one of the local fishermen is hauling in a load of live lobster. Look for the sign beckoning you to “try our famous lobsta rolls.”

At $9.97 for a quarter pounder, this may be one of the best lobster roll bargains in New England. BTW, this place is just a few minutes from Interstate 95.

Even further north past Portland, Maine, you’ll find Red’s Eats on Route One in Wiscasset. It’s hard to miss this tiny place because there’s usually a long line of people waiting to order one of the most impressive lobster rolls you’ll ever see. We’re talking meat from a one-pound lobster that is heaped to overflowing on a tasty, buttery roll.

If you don’t have the patience to wait in line at Red’s, there is another good choice across the street. There’s no doubt that Sprague’s Lobster benefits from the long lines at Red’s, but it has a following of ardent fans who say Sprague’s is just as good.

Plus, you are much more likely to get instant gratification at Sprague’s. They may not pile the roll as high, but you’ll get lobster that’s just as fresh and delicious.

Follow this link for some hotel options so you’ll have a place to rest after your eating tour of the New England coastline.

This post was posted by Fiona Moriarty on Hipmunk’s Tailwind blog on July 1, 2015