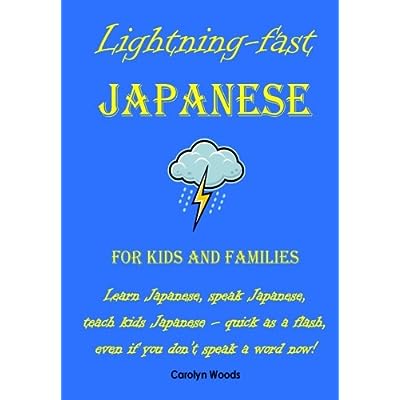 A few weeks ago, I received a copy of Lightning-Fast Japanese by Carolyn Woods.  The book is a learner’s guide to teaching you’re children basic Japanese.  Mrs. Woods covers the basics, including numbers, colors and everyday household objects.  You work the words into everyday conversations so that your children pick them up.  There are also word games that you can play as well.

I have been teaching myself Japanese on and off for a few years now, and have picked up a little bit here and there…mostly by watching moves, anime and tv dramas in subtitles.  The book is a great tool to help you learn, but I noticed that there are a few fundamental things missing from it.  The first thing is that there isn’t an explanation or diagram of the alphabet.  The alphabet is phonetic, meaning that the way something is the way that it sounds when you speak it.  For example, “baka” means idiot or fool.  The alphabet is “ba” (ば) and “ka” (か).  There are also several parts to the alphabet as well:  hiragana (the main part), katakana (used for foreign words) and kanji (modified Chinese that is used for nouns, adjective/verb stems).  Without knowing this, not only will you not be able to pronounce words, but you also won’t be able to recognize them when you see them written out.
The second is that there isn’t any breakdown on how to pronounce the words.  This ties into the first point, and should be included since the alphabet isn’t included.  Many of the syllables are repeated depending on which part of the alphabet you are using.  So if you mispronounce it, then you could be saying something completely different or just plain nonsensical.
The third is actually a bit hard to explain.  There is a certain way that you conjugate (best word that I can come up with) words when you are talking to someone.  It all depends on who you are talking to.  You would use one set if you are talking to, let’s say a friend, which would then break down further between male or female.  I only know this due to visiting the Japanese Embassy in Washington D.C. when I was a kid, so this is a bit sketchy at best.
This also ties into sentence structure, which is also left out.  This is one area I’ve always stayed away from since it can be a bit confusing.  I know from my past experience learning Spanish in high school that a lot of times, things are said backwards.  For instance, we would say ‘the black cat’.  In Spanish you say ‘the cat black’.  I’ve heard from Japanese friends who are learning English complaining about the same thing.  One referred to it as a “tongue twister”.  I myself can’t add much in here, mainly since my vocabulary is limited.  But it is something to keep in mind.
Overall the book is good if you want to teach some words to your children, since it covers a broad range of vocabulary.  However, if you seriously want to learn the language, then I would suggest using it along with something else.  It would be the perfect study guide to go along with one of the many learning programs, like Rosseta-Stone or Learn Japanese.  I wouldn’t use it by itself unless you are already familiar with the basics or have someone who fluently speaks Japanese to help you.  The book is available in both paperback ($14.95) and Kindle ($9.99) on Amazon.
I received a paperback copy of the book to facilatate my review.